A slow motion picture of a galloping horse shows the extreme hyper-extension of joints at speed and the vital combined roles of soft tissue structures in stabilising and supporting knees and fetlocks as well as the total weight of the animal and their rider. Horses may also stand for days on end without the need to lie down like other species. All these manoeuvres are possible due to the strength and elasticity of tendons and ligaments. These are complex structures comprised of stacked parallel bundles of collagen, intricately involved in the biodynamics of movement. Tendons join muscle to bone and ligaments join bone to bone. Tendons are further classified as extensor tendons (allowing a joint to open or extend) or flexor tendons (allowing a joint to flex or close inward). Ligaments by comparison are strong fibrous bands which both provide support and facilitate movement of adjacent bones within joints.

Tendon and ligament injuries are common

Ask our racetrack veterinarians and they will tell you that superficial flexor tendon strain is a regular occurrence and the most common performance related condition they see. Our other vets based at the clinic and dealing mainly with referral cases, jumpers and eventers, campdrafters, polocrosse or stock horses see fewer flexor tendon injuries and more suspensory ligament or inferior check ligament problems. We also treat a significant numbers of extrinsic injuries such as penetrating wire wounds, kicks or stake wounds which can damage the protective sheath surrounding tendons and allowing entry of bacteria. Horses that are galloped on, either in the paddock or during competition are sometimes presented with varying degrees of skin or tendon trauma.

It is helpful to think of equine tendon or ligament composition and strength as being a dynamic state, changing according to genetic or environmental determinants, age and level of training.

As exercised horses age there are changes in molecular composition of tendons and fibril diameters. Too little or too much load bearing exercise in growing horses may retard development of quality tendon matrix proteins. In older horses degenerative changes invariably occur due to cumulative fatigue, meaning older animals are more prone to tendon injury. Excessive degeneration, stress or fatigue of fibres may lead to tendon or ligament strain, bowing (tearing and distortion of fibres) and sometimes rupture.

Predisposing factors include lack of fitness and preparation, excessively hard and uneven ground or over-exertion. We sometimes see a link to poor shoeing and hoof imbalance changing the limb biodynamics, likely leading to abnormal tendon and ligament stresses. Occasionally tendonitis occurs in a forelimb due to a pre-existing problem in the opposite limb.

It should also be noted that sometimes the best prepared and cared for horse becomes injured, and it is difficult for vets to explain why. Some surfaces are blamed by trainers or jockeys, yet studies show these types of injuries occur in all tracks, all over the world. Speed has been shown to be one factor linked to the frequency of tendonitis, with faster speeds or surfaces potentially leading to more injuries.

Stages of tendon injury and repair.

Many clinical cases are preceded by subclinical degeneration of the tendon matrix, which is the organised complex made up of water, collagen and non- collagenous glycoproteins that confers mechanical properties to the tendon

The acute inflammatory stage of tendonitis generally lasts for 1-2 weeks, (although the severity and duration of this phase may be lessened by anti-inflammatory medications). Haemorrhage, oedema and white blood cell accumulation are usual in this stages.

Remodelling of this scar tissue takes many months after a tendon injury, and although Type 1 collagen is laid down eventually, it may not be as functional or resilient as normal tendon tissue. This is the chronic remodelling or chronic repair phase.

Re-injury of the same tendon is quite common during or after repair stages, or injury to the other leg.

Signs of tendon or ligament injury.

Sometimes severe acute tendon or ligament strain will lead to a degree of lameness but many animals are more likely to show pain, heat and swelling on limb palpation rather than demonstrating a head nodding, short stepping gait typical of other limb problems.

Riders and trainers should routinely feel their animals’ legs after exercise and get used to what is normal. Ask any vet and they will tell you that palpation is as much art as science. Learn to detect swelling or thickening, heat or pain on leg palpation or flexion of joints. Be systematic- run your fingers down the flexor tendons distinguishing between deep (close to the cannon) and superficial tendons. Suspensory ligament problems are fortunately uncommon, but may be detected in three regions- proximal (behind the knee), midbody (mid-cannon) or distal (above the fetlock).

Imaging is the gold standard for diagnosis.

We used digital ultrasound machines for both diagnosis and assessment of healing of tendon or ligament injuries.

Imaging takes the guesswork out of diagnosis, and allows accurate follow-up of the size and healing of lesions. We scan, record, label and store images to enable serial assessment as the horse undergoes treatment and rehabilitation. Vets are happy to give owners copies of the scans also via email, for their own records and to share with the referring veterinarian who usually treats their horse.

Assessment by ultrasound can be quantitative, where the size of lesions is measured as a cross-sectional area. Grading for the degree of echogenicity (or blackness) of the lesion and alignment of fibres longitudinally is also possible.

Ultrasound examination is most helpful in the first 1-2 weeks following injury. We ideally like to reassess these limbs 12 weeks later to gauge healing following treatment and rest, and then again before the horse is returned to work (approximately 6-12 months after initial injury). 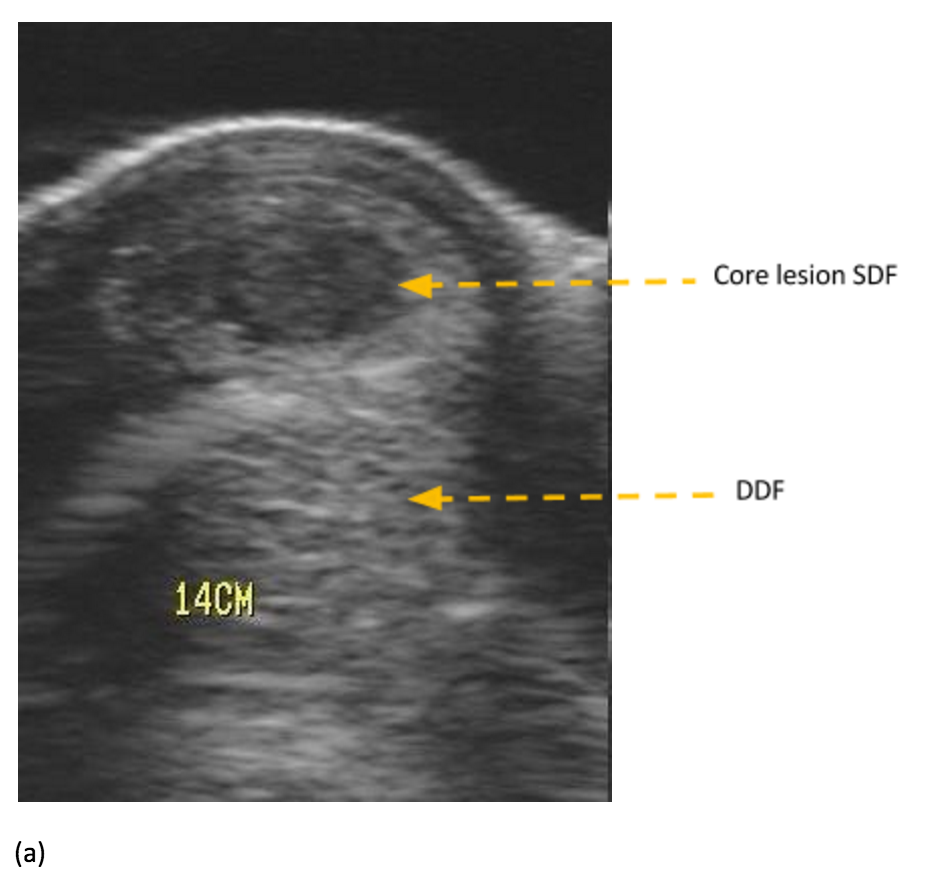 Figure 1. (a). The loss of linearity of tendon fibres is evident on the longitudinal view First aid for tendons and ligaments.

If a tendon or ligament injury is suspected the horse should be rested straight away and confined to a box or yard.

Icing of the limb is useful initial therapy, for 20-30 minutes once or twice a day. Poulticing and support bandaging may help. Your vet may prescribe non-steroidal anti-inflammatory (NSAID) medications such as phenylbutazone for 5 to 7 days.

Open wounds involving tendons are regarded as emergencies and veterinary treatment should be sought as soon as possible. Surgical debridement, flushing of the tendon sheath, suturing of lacerated tendons and bandaging or casting are some of the treatment options. These cases require antibiotics, anti-inflammatories and tetanus antitoxin.

The ultimate aim of treatment is to allow adequate healing of the tendon, with hopefully no reoccurrence of injury after return to work. Injuries that are assessed as moderate to severe may require a minimum of six to nine months rest.

Dr Glen Laws says ‘My advice to trainers is conservative. Give these horses time; 4-6 weeks in a box or stall, before turning them out into a paddock. Keep them on their own at first to avoid the galloping or rearing behaviour that may occur in a group. On return to work, graded exercises programs help, but should be stringently followed. These horses are sound and look fit after a few weeks return to steady exercise and the temptation is to gallop them too soon. Don’t!’

There is no ‘magic bullet’ for injured tendons or ligaments. These soft tissues need plenty of rest and time to repair.

Stem cells are primitive cells that have the capacity to divide and differentiate into other cell types, such as muscles, tendons, ligaments or cartilage. These cells are either harvested from the individual animal or from donor animals.

There have been a number of exciting commercial products released to the equine market, with two in particular used by our veterinarians for joint or tendon problems- PRP (Platelet Rich Plasma) and Regeneus Equine CryoShot.

CryoShot is fat derived stem cells, harvested usually from excess fatty tissue of donor horses following gelding. The vials are stored in liquid nitrogen until use. Veterinarian Dr Cassandra Robinson explains their use ‘We assess the tendon lesion via ultrasound, which is also used to inject the thawed cells. This is normally done within a week or two of injury. We follow this treatment with another ultrasound exam at twelve weeks to assess progress’.

By the stage the black ‘hole’ or core lesion seen initially should have resolved and the longitudinal appearance of the tendon is much improved. We stress to owners that tendon tissue does not regenerate after injury, but repair is by the formation of scar tissue, which may be stronger but is less elastic and less flexible. Stem cell treatment is aimed at improving the quality of the resultant scar, but adequate convalescence time is still required. 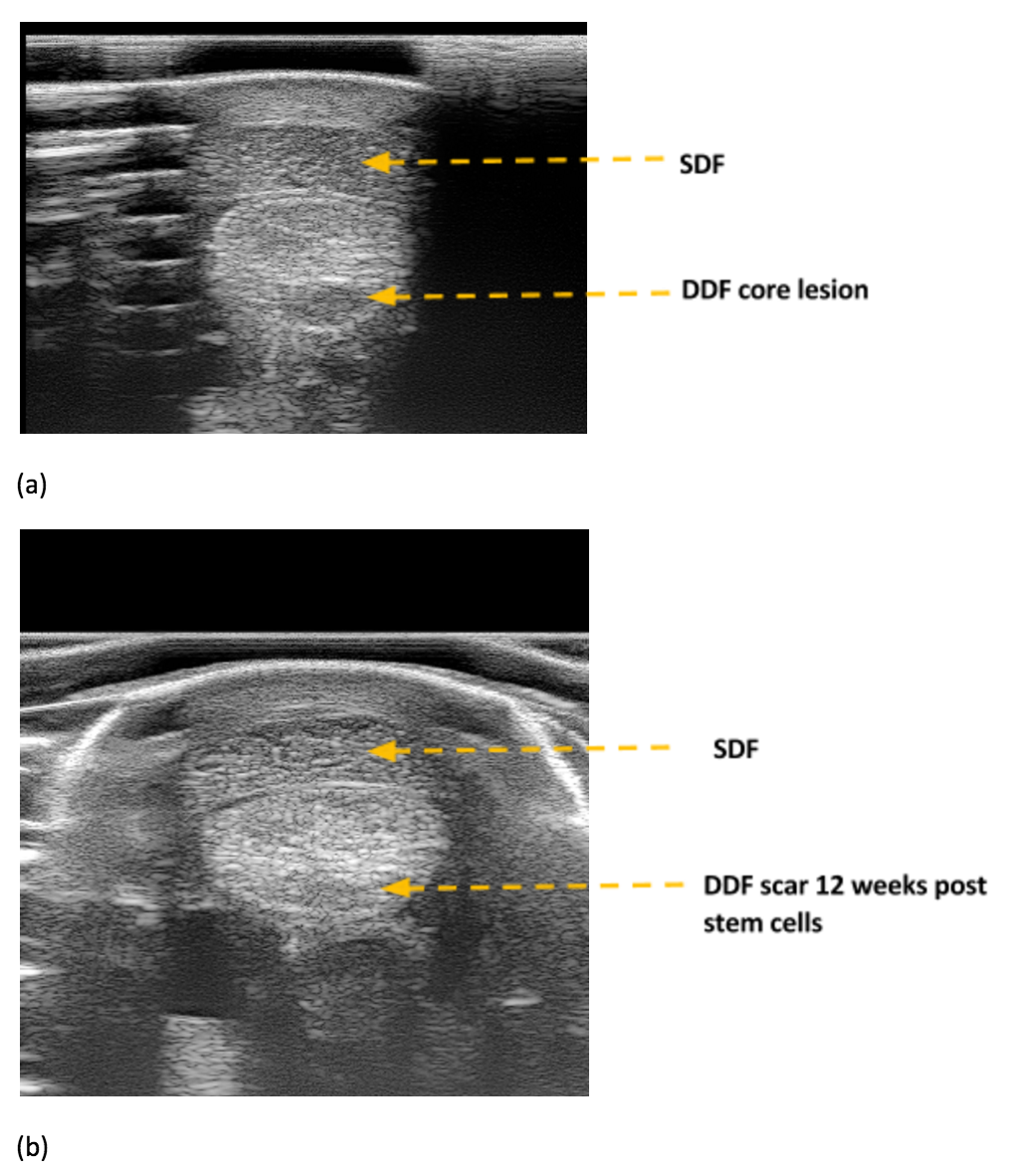 Platelet Rich Plasma is processed from the horse’s own blood, so takes longer to do. Activated platelets that result from this process release a range of growth factors which increase cells, new blood vessels and connective tissue, hence stimulating healing.

New treatments for tendon and ligament damage aim to improve the quality of this scar tissue and may help to prevent reoccurrence.

Buying a horse off the track with a history of tendonitis.

Our advice is to collect as much history as you can. A young horse that has bowed a tendon soon after going into work, or before any racing pressure may have a poorer long term prognosis. Ask for a vet check if you are unsure and consider requesting an ultrasound scan to assess the degree of injury or healing. With time many of these horses perform well as riding horses or jumpers.

(This article first appeared in Horse Deals, May 16)