Glen graduated from the University of Queensland in 1981. He is part of a veterinary family with his father, David, a long term partner at the Oakey Veterinary Hospital, and an uncle, brother and wife also in the profession. He spent his first five years following graduation at One Tree Hill, South Australia under the guidance of the late Dr Howard Mortimer (‘Mort’), in a predominantly equine practice.

Glen and his family then travelled for 12 months doing locums in equine practices in Queensland and Darwin before coming back to Oakey to work in 1988. Here he developed a strong interest in racetrack practice, lameness and equine performance investigation, as well as expanding the equine chiropractic services his father established.

Glen spent four years working in York UK between 1993-7 and maintains strong friendships with the vets from The Minster Vets (previously Grant and Partners), where he was responsible for a number of large racing stables and studs.

Since his return from the UK Glen has continued racetrack, reproduction, performance horse and chiropractic practice on the Darling Downs. After more than three decades working as an equine veterinarian he is still dedicated to his profession, striving for good service based on sound practical advice and experience, as well as utilising the latest tools and technology available. He enjoys mentoring younger veterinarians and the day to day interactions with owners and trainers.

Glen has two adult sons, along with two gorgeous grandchildren. He lives on a small farm near Kingsthorpe where he breeds the odd head of cattle. He is a sports tragic and follows many different disciplines and teams. He hopes one day to have a champion racehorse of his own. Glen also enjoys spending his spare time with his adorable little chocolate labrador named Ellie. Steve is a graduate of the University of Queensland (1991) and has spent much of his professional life working as an equine surgeon within the Darling Downs and South East Queensland. He has trained with some of the best equine surgeons from Australia and internationally.

Steve has a keen interest in all aspects of equine surgery and is an accomplished orthopaedic and soft tissue surgeon, meeting the challenges of complex fracture repairs, colic surgery, bone chip removals and correction of limb deformities in foals.

Steve gives his time willingly in training veterinary students and younger veterinarians, as well as speaking to various horse groups. Over the years he has assisted many colleagues throughout Queensland and interstate by providing second opinions and surgery of their equine cases. He has acted as National Veterinary Exams Examiner for foreign trained veterinary surgeons for more than a decade.

In addition to his veterinary qualifications he also has a private pilot license for fixed wing aircraft and helicopters, which allows him to provide additional services to remote clients who are unable to transport their horses to our clinic.

In his spare time Steve enjoys travelling and a range of outdoor activities including camping and bike or horse riding with his son and partner. 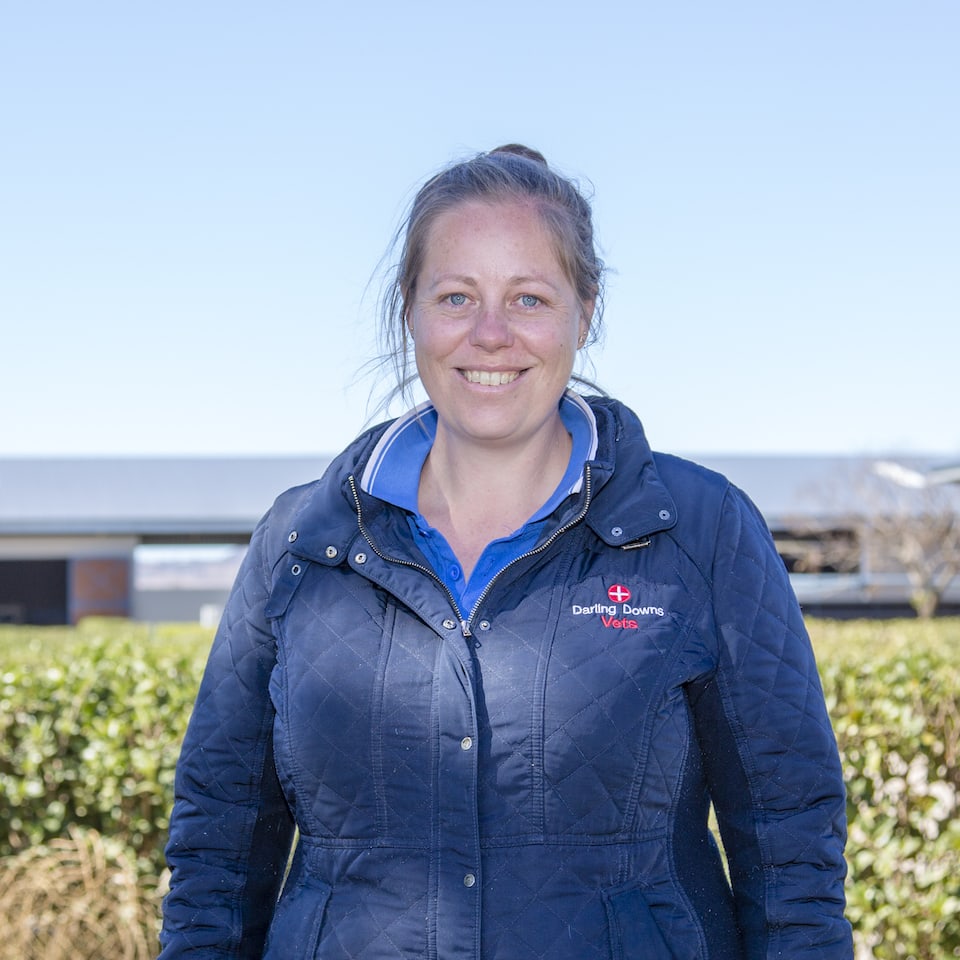 Cassandra grew up in Mudgee, NSW and graduated from the University of Sydney in 2009. Since this time she has been employed within our practice as an equine veterinarian and surgeon. She has achieved further academic qualifications in her chosen field as well as acquiring a vast wealth of practical experience working either with Steve and Glen, or independently as a crucial part of our busy 24- hour equine surgical referral service.

Cass is dedicated and hardworking, giving much to the horses in her care, particularly sick foals and surgical cases in the post- operative period. In recent years ophthalmic surgery has become another one of Cassandra’s special interests. Her experience means that Cass is a highly valued and respected member of our team, sharing her knowledge with clients, nurses, students and fellow veterinarians.

Cass enjoys travelling and spending time with her animals and friends. Unfortunately, her horses do not see too much of her due to her busy working life, but one gelding helps out when he can by acting as the main blood donor horse for our clinic. Francois was raised in the Western Cape area of South Africa, then pursued his interest in veterinary science and horses, rather than staying in his family’s vineyard business. He studied at the University of Pretoria and after graduation worked in equine racetrack practice south of Johannesburg for 15 years.

For over a decade Francois travelled and worked in various equine vet positions in Oman, Abu Dhabi, New Zealand and Turkey. He emigrated with his wife to Australia in 2012, when he joined Drs Max Wilson and Robyn Woodward at Equivet Australia, Southbrook, Queensland. During this time, he developed further interest and skills in equine stud work.

He enjoys all aspects of equine practice, including the care of pleasure and performance horses, and is primarily involved in equine reproduction and stud work. Darling Downs Vets were pleased to welcome someone as hardworking and experienced as Francois to their team in 2017, after their purchase of Equivet’s ambulatory practice component. Essie graduated from James Cook University in Townsville in 2013. Essie began her career in Malanda on the Atherton Tablelands before completing an Equine Internship at Goulburn Valley Equine Hospital in Victoria. Emerald QLD was her next destination where she refined her skills in everything cattle gaining her accreditation in Pregnancy Testing and Bull Testing. Joining our team in January 2019 Essie has a keen interest in mixed practice. She particularly enjoys equine medicine, small animal medicine and cattle work.

Essie enjoys camp-drafting and triathlons outside work. Her trusty dog Enki is her training partner for triathlons. 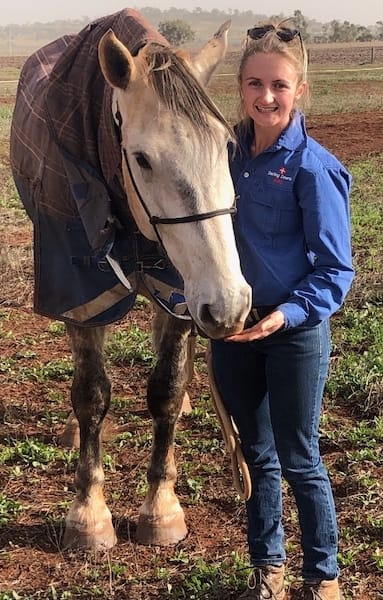 Kate grew up on a beef cattle property in Monto, QLD. She studied at the University of Queensland in Gatton and joined the Darling Downs Vets team shortly after graduation in December 2018. Kate loves the variety mixed practice has to offer, but is particularly interested in equine medicine and reproduction, as well as loving time spent dabbling in small animal surgery. Outside of work, Kate loves being at home on her family property and riding her showjumpers.
Professional qualifications and post graduate training include: 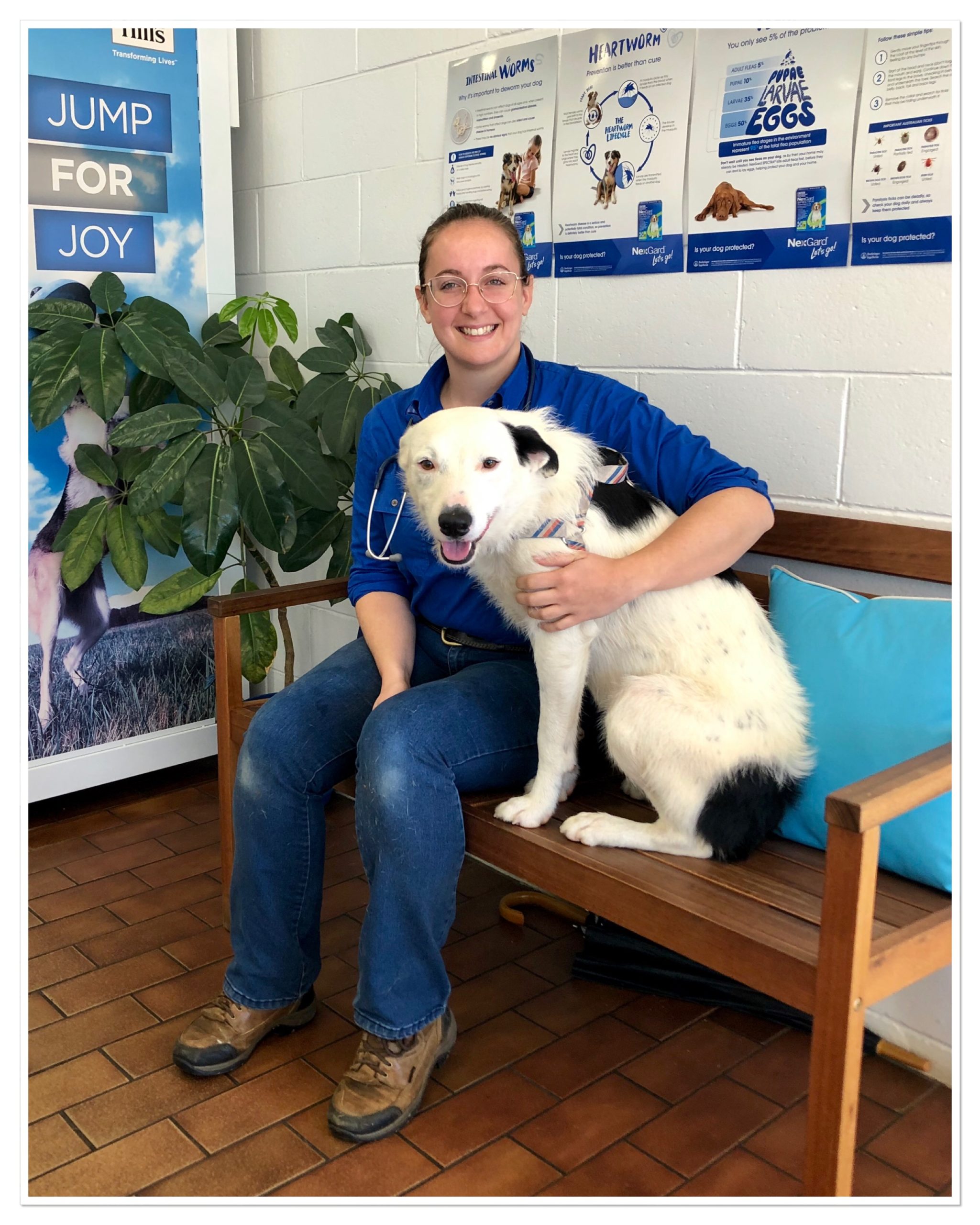 Mika joined us in March 2021 after graduating from James Cook University in 2020. Mika grew up in Hong Kong where her passion for equine medicine first started. She spends her time between both our small animal and equine clinics and has a passion for all creatures great and small.  On the weekends you can find Mika riding her two arabian horses or hanging out with her beloved dog Roy! Georgina graduated from Charles Sturt University in 2018 and has grown up on a cattle station in North Queensland. She has a strong passion for equine veterinary care and in particular equine dentals, in which she has completed her level 2 equine dentistry course.  In Georgie’s spare time you can find her riding horses, sewing or hanging out with her adorable border collie named Willow.

Darling Downs Vets are lucky to have a team of experienced and qualified veterinary nurses working at both our clinics, or travelling with our mobile vets in the field. The vets agree our nursing team are one of our strongest points, keeping both clinics running smoothly and taking excellent care of the equine and small animal inpatients. Their other roles are assisting with general anaesthetics, liaising with clients and maintaining equipment and instruments. They are all highly skilled horse handlers, essential when dealing with all ages and temperaments of horses during anaesthesia or treatments.

Please do not hesitate to ring the nurse phone at Westbrook (during office hours 8am-5pm) or the main practice number if you have any queries. 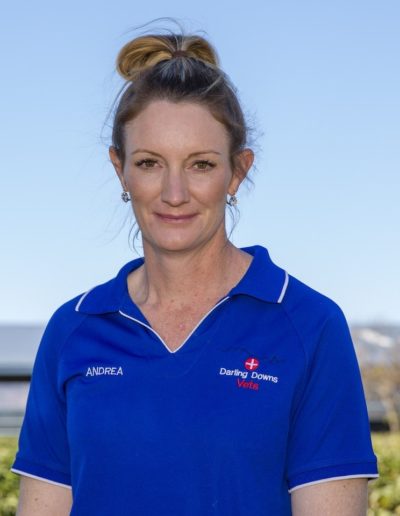 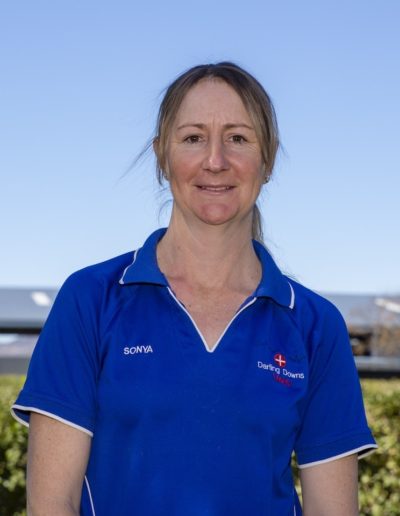 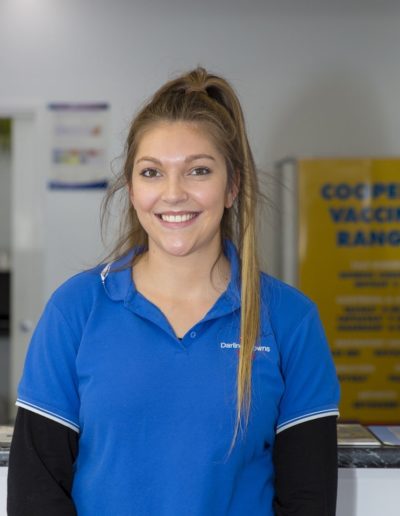 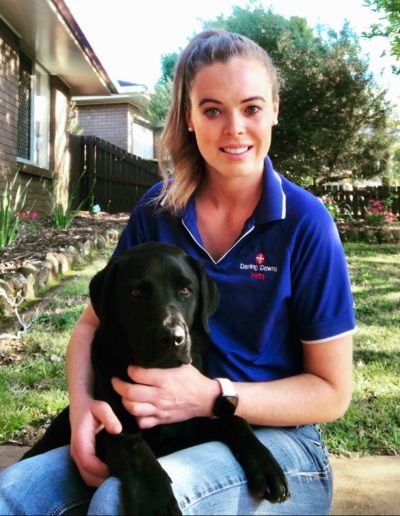 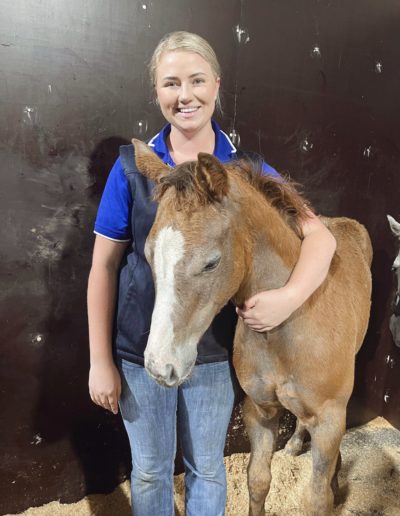 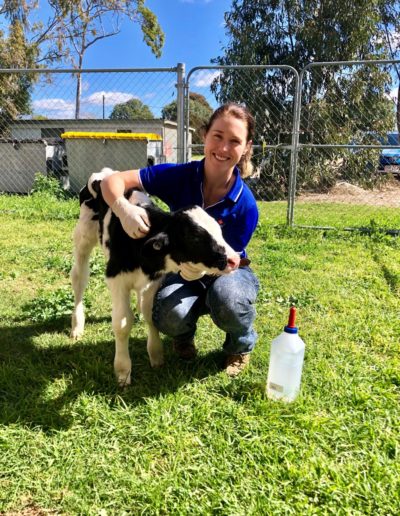 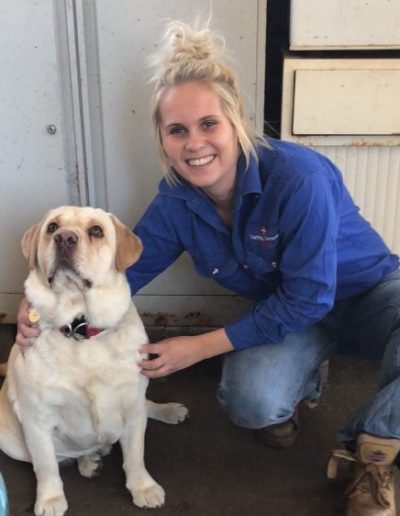 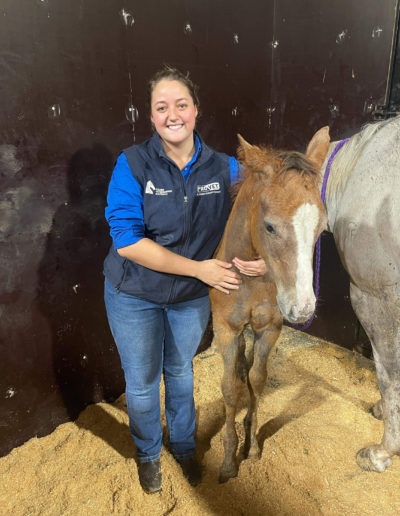 Our office staff are based in the Oakey clinic/practice office and are usually the first point of contact for clients. Please ring 0746919000 if you wish to make an appointment or have any questions. Alternatively, drop into 97 Campbell Street for friendly advice or over the counter sales of large and small animal products. 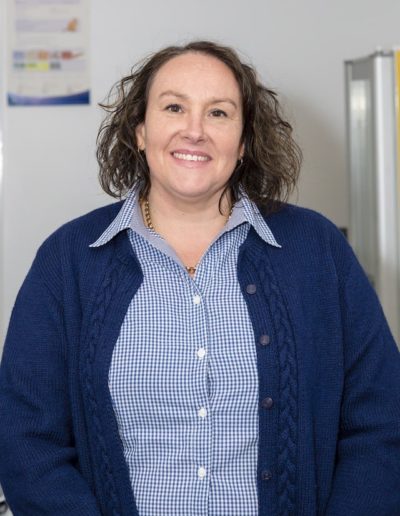 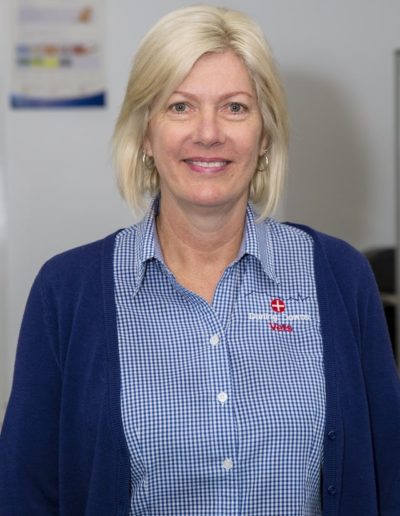