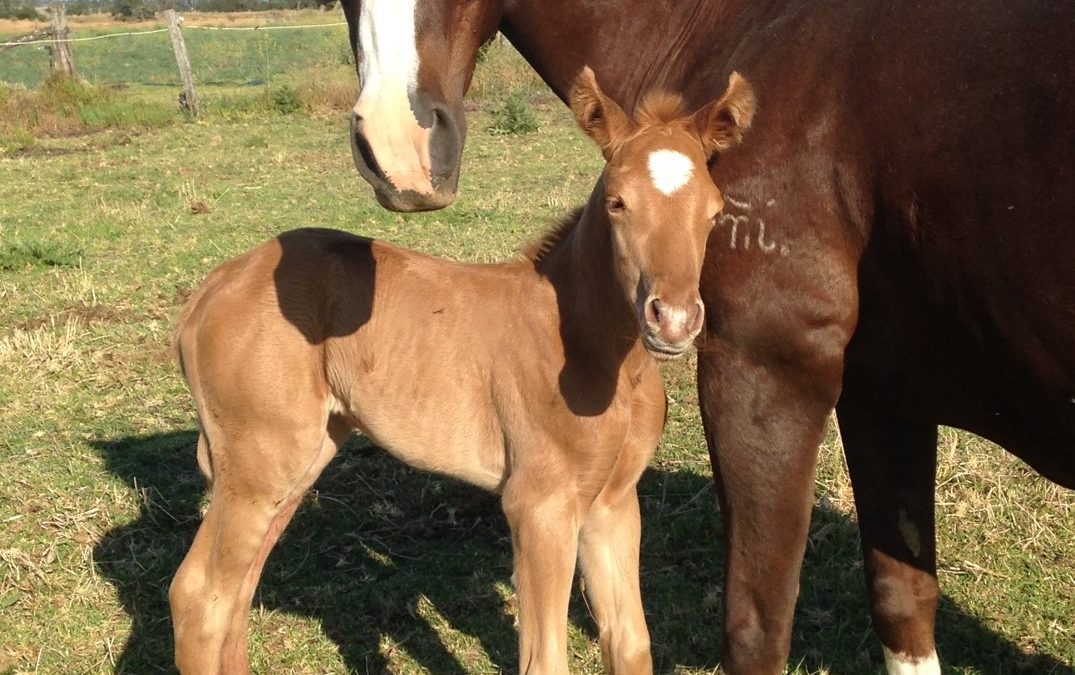 In Part 1 of this two-part blog on strong foals, we look at the role of strong immunity – including those mare, foal and environmental factors-that will give newborn foals the best start in life.

Care of the brood mare.

Good maternal nutrition and health, especially in the last months of gestation sets the scene for a healthy foal and the demands of lactation.

Pregnant mares should receive booster vaccinations including Tetanus/Strangles and Equine Herpes Virus (which is given at 5,7 and 9 months gestation if there is a risk of EHV1 abortion in your location1). Equine Hendra Virus vaccination has been proven safe in pregnant mares and should be undertaken if the mare is due for their annual booster. Rotavirus vaccination is also possible to protect against rotavirus diarrhoea in certain high risk situations.

A balanced diet is advised throughout pregnancy, with increased calories needed in the last few months. Pasture (particularly poor quality grass) should be supplemented with grain as well as a good quality hay. There are several fortified pelleted mare breeder supplements available which provide adequate energy, protein, mineral, vitamins and trace elements. Selenium, zinc and copper are recognised as important. A mare body condition score of 5-7 (out of 9) before conception is advised and obesity should be avoided.

Broodmares should receive a broad spectrum wormer at least twice yearly for treatment of small strongyles, bots and tapeworms. If there is any doubt about the efficacy of your worming program faecal egg counts are advised. Regular dental checks for irregular dental wear and corrective dental floating is also recommended.

Pregnant mares with a similar gestational age should be maintained in small groups, so that spread of infectious diseases can be minimised. Stresses such as long transportation should be avoided.

Unlike other species there is no placental transfer of protective antibodies from mare to foal, hence the extreme importance of optimising colostrum quality and quantity and ensuring adequate intake.

The transfer of passive immunity occursby the passage of large molecule immunoglobulins (antibodies) from mare to foal via colostrum in the 18 hours following birth. Normally such big molecules cannot pass through the gut wall, but for the first few hours of life the foal gut wall has open spaces and cellular projections which allow for passage of these immunoglobulins. After this narrow window of time the gut wall closes and the opportunity for vital transfer of immunity from the mare ceases.

Colostrum should be regarded as liquid gold and we should make all effort to ensure maximal intake. Dam factors as well as foal factors are recognised as causes of failure of passive transfer of immunoglobulins. Other factors such as the exposure level to pathogens and management practices also play a role in prevention of disease.

Premature or twin deliveries have the added problems of small/weak foals and inadequate colostral quality and quantity.

Certain mares may ‘run’ milk in late gestation, with a subsequent premature leak of colostrum and loss of its precious immunoglobulins.  Milk should be collected from these mares, stored frozen and gently thawed (not microwaved) and administered to the foal at birth.

Maiden mares may reject their foal and not allow them to suckle. They may need sedation or restraint for facilitating milking or sucking. Maiden mares also have lower quality colostrum (ie lower antibody levels) than older broodmares and may have smaller than normal teats. Other factors that may lead to reduced colostrum intake include premature births (less than 320 days gestation), premature placental separation or placentitis, prolonged or difficult labours, ‘dummy’ foals (Neonatal encephalopathy), trauma such as fractures sustained during delivery or because of attacks by the mare, or congenital malformations such as jaw deformities. Most horse studs keep a frozen colostrum bank for any of these scenarios.

Signs of a normal healthy foal.

Testing  for adequate  transfer of immunity.

A refractometer can be used for testing the level of protein (antibody level) of colostrum.

Failure or partial failure of immunity is a recognised risk factor for the development of septicaemia or joint infections. Knowing a foal’s IgG levels helps your vet decide whether further colostrum or a plasma transfusion is indicated.

Veterinary medicine offers much these days in regards to the prevention, diagnosis and treatment of foal problems. Our ‘take home’ advice: keep a close watch on mares and newborn foals and seek veterinary help early if you have any concerns. We are always happy to answer any questions about your animal’s health.